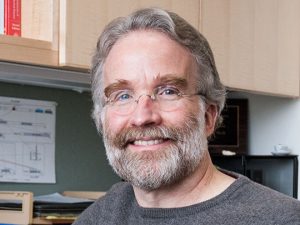 A University of Wisconsin-Madison researcher has established a new approach to understanding how protein and RNA molecules in a cell cooperate to direct the proper expression of genes.

The approach improves upon a well-established method called genetic suppression, developed more than a century ago. A genetic suppressor is a second mutation that corrects the defect of a primary mutation, according to David Brow, professor of biomolecular chemistry.

The research was recently published in the journal Genetics.

By using a customized targeting sequencing technique, Brow found that he could identify suppressor mutations much more easily and in much larger numbers than before.

By mapping the mutations on existing molecular structures, he obtained new insights into an essential step of gene expression called pre-messenger RNA splicing.

“This approach should be broadly useful for understanding the dynamics of many different complex biological assemblies or pathways,” Brow said.

The new research targeted a specific cold-sensitive mutation, U4-cs1, that blocks activation of the spliceosome, essentially an incredibly small machine within the nucleus of a cell. It is made of RNA and protein and removes meaningless information from cellular RNAs.

The approach identified five new genes in which mutations can overcome the block created by U4-cs1.

Read more on this story by Andrew Hellpap at the School of Medicine and Public Health at the link below.