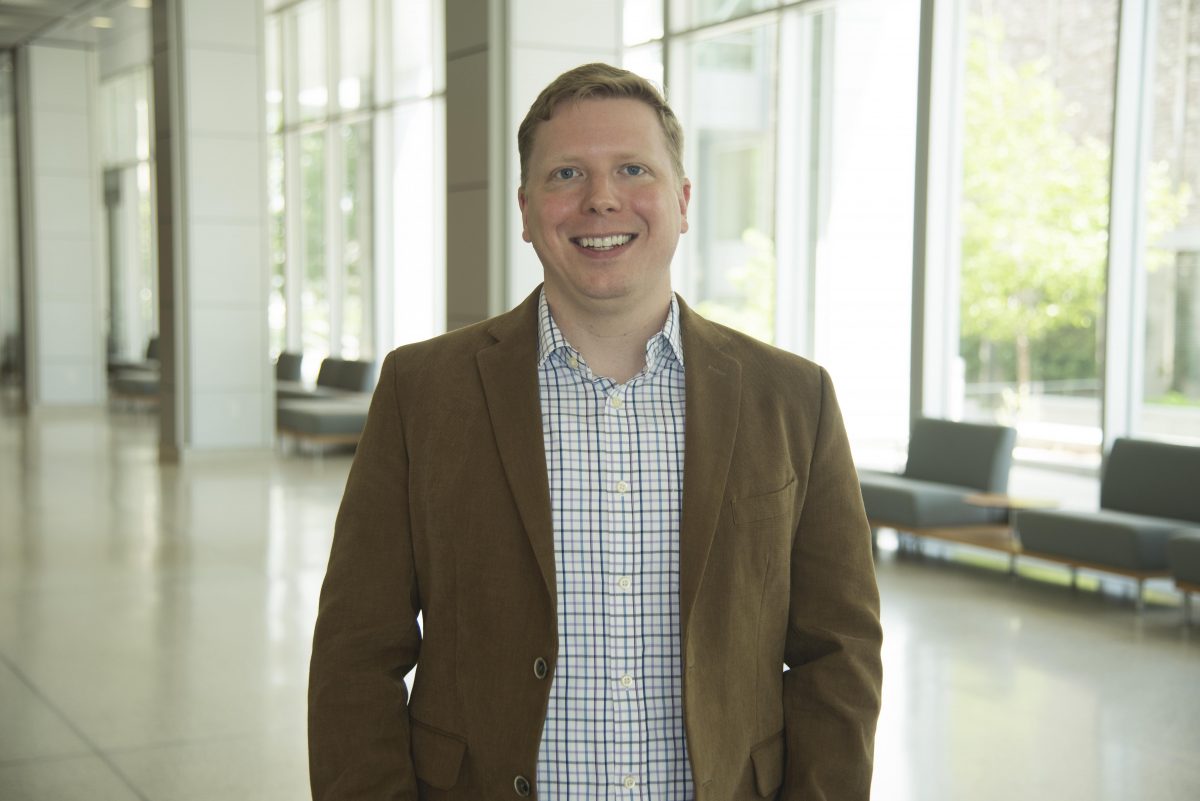 With a grant from the Edward P. Evans Foundation, biochemistry associate professor Aaron Hoskins is searching for new treatments for myelodysplastic syndromes — a type of blood cancer — by being able to screen for RNA splicing inhibitors using “humanized” yeast.

Myelodysplastic syndromes (MDS) arise when bone marrow has defects in producing red blood cells, which can cause anemia or even blood cancers like acute myeloid leukemia. Treatments for the disorder are limited.

Many patients with MDS have mutations in the spliceosome, a molecular machine responsible for taking out sections of RNA and putting what remains back together in a process called RNA splicing. The spliceosome acts like a film editor, removing some scenes and joining, or splicing, together others to make a complete movie. RNA splicing allows for a large diversity of proteins to be made from a relatively small amount of DNA and occurs in all eukaryotes including humans and yeast, but not bacteria.

Cells unable to splice RNA properly are considered “splicing sick,” and it just so happens that the mutations that cause this also make the cells susceptible to new therapies that target the spliceosome.

“The splicing machinery has emerged as a potential therapeutic target for a number of human diseases but especially cancers,” Hoskins explains. “Many cancer cells have stressed their splicing machinery to its limit and small perturbations in splicing can lead to cancer cell death. This means that low doses of splicing inhibitors could potentially be used in cancer chemotherapy.”

Currently, only a few drug options are available that target the spliceosome. Many groups are trying to discover new molecules that inhibit the splicing machinery, which requires screening the effectiveness of hundreds of thousands of chemicals. This would normally be very expensive and time-consuming. The key to Hoskins’ experiments will be “humanized” yeast his lab has genetically engineered. The yeast use human splicing proteins, some of which are associated with MDS, in place of their own.

With sophisticated lab work they’ve gotten the yeast to use these human proteins and ensured they are susceptible to splicing inhibitors. It is the culmination of work done by former Integrated Program in Biochemistry (IPiB) graduate students Tucker Carrocci and Sarah Hansen, as well as former undergraduate Doug Zoerner. The project is now being led by several Hoskins Lab members, including genetics graduate student Sierra Love and lab manager Josh Paulson.

Because yeast is so cheap and quick to grow, they now plan to screen about 200,000 different drug candidate compounds to see if they inhibit the growth of the “humanized” yeast. For this, they’ll utilize the Small Molecule Screening Facility at the UW Carbone Cancer Center using the $400,000 grant. EvansMDS, the primary medical funding initiative of the Edward P. Evans Foundation, awarded the funds.

Hoskins has also been awarded a Pilot Research Grant from the UW Institute for Clinical and Translational Research, co-sponsored by the Cancer Center, for $26,000. This award will fund similar research that will study how spliceosome inhibitors function using a technique that lets them sequence all of the RNA present in a cell at a point in time and assess changes.

“Our approaches are particularly powerful because it lets us connect splicing inhibition to yeast growth and to simultaneously conduct a counter-screen using a non-mutated yeast strain,” Hoskins says. “This is dramatically cheaper, faster, and easier to interpret than carrying out splicing assays in vitro or in human cells.”