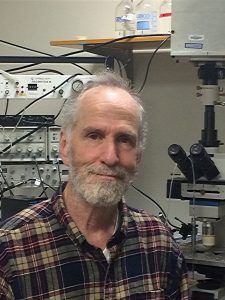 It was recently announced that the winner of the 2022 Sir Bernard Katz Award for excellence in research on exocytosis and endocytosis is Dr. Meyer Jackson of the University of Wisconsin. Congratulations Meyer!

The Sir Bernard Katz Award for Excellence in Research on Exocytosis and Endocytosis is named after the investigator who established the exocytotic nature of synaptic transmission and discovered the ligand-gated channel basis for the post-synaptic response. He is one of the founding fathers of biophysics and neuroscience.

Bernard Katz was born on March 26, 1911, in Leipzig, Germany, of Russian Jewish origin. His early education was at the Albert Gymnasium in Leipzig (1921-1929). He then studied Medicine at the University of Leipzig and obtained his MD in 1934.

Katz fled Germany in 1935 and was accepted as a Ph.D. student by Professor A.V. Hill at University College, London (UCL), where he worked until August 1939. He referred to Hill as his greatest scientific influence and later described this period as “the most inspiring period of my life.” Katz then left Britain for Sydney, Australia, where he worked with John Eccles and Stephen Kuffler. In 1941 he became a naturalized British citizen, and in 1942 he joined the Royal Australian Air Force and served as a Radar Officer in the South West Pacific until the end of the war. Immediately after the war Hill invited Katz to return to UCL in 1946 as Assistant Director of Research and Henry Head Research Fellow. During this period, he presented the first description of inward rectification and demonstrated, together with Alan Hodgkin, that the overshoot of the action potential results from an influx of Na+. In 1952 Katz succeeded Hill as Professor of Biophysics at UCL (he headed a department there until his retirement in 1978). Katz also married Marguerite “Rita” Penly, and they had two children, David and Jonathan, during this time.

During the 1950s, Katz and Paul Fatt observed spontaneous miniature synaptic currents and developed the “quantal hypothesis” that is the basis for our current understanding of neurotransmitter release as exocytosis and for which he received the Nobel Prize in Medicine or Physiology (together with Ulf von Euler and Julius Axelrod) in 1970. In the late 1960s, Ricardo Miledi and Katz advanced the hypothesis that depolarization-induced influx of Ca2+ triggers exocytosis. In the early 1970s, Miledi and Katz quantified the voltage noise induced in muscle by acetylcholine to infer properties of single ion channels before they could be directly measured and thus opened the era of molecular neuroscience.

In addition to his scientific achievements, Katz was also admired for his crisp, unpretentious writing style. He remained scientifically active long after his retirement. Katz’s wife died in 1999, and he himself died at age 92 on April 20, 2003.