Information in the brain is encoded in the electrical activity of neurons that communicate with each other using chemical synapses. These synapses can be excitatory or inhibitory. Recent work from many laboratories has revealed that, rather than merely suppressing neuronal firing, inhibitory synapses are intimately involved in shaping the flow and timing of information in neural circuits.

My research attempts to understand the mechanisms by which biophysical events at inhibitory synapses give rise to the computational roles that inhibition plays in neural circuitry. This topic requires study on several levels including the molecular function of GABA-A receptors (i.e., the postsynaptic ion channels), the time course and spread of GABA in the synapse and the connectivity and timing of signals across many excitatory and inhibitory neurons within a circuit.

I use a combination of patch-clamp electrophysiology, rapid solution exchange methods and computer modeling to address these issues in cultured neurons, brain slices and heterologous expression systems. Some of my previous work in this area and my current research directions are outlined below.

The Time Course and Spatial Spread of GABA at the Synapse
A slightly “higher” level in the spectrum of inhibitory mechanisms involves questions like: “What happens to the GABA that gets released from a synaptic vesicle? Does it get taken back up or can it diffuse over to receptors at neighboring synapses? What happens to those receptors if or when it gets there?”

We have begun to answer these questions at synapses on granule cells of the dentate gyrus by taking advantage of the fact that GABA-A receptor antagonists that unbind very rapidly can be replaced at their binding sites by the GABA released into the synapse. This introduces a late component into the rising phase of inhibitory postsynaptic currents. We therefore used measurements of the IPSC rising phase in the presence of antagonists to show that the GABA released from a single vesicle reaches concentrations in the millimolar range, but decays to low micromolar levels within only a few hundred microseconds.

We have incorporated our physiological data, as well as published measurements of synaptic geometry and GABA transporter kinetics, into Monte Carlo models of GABA diffusion at synapses in an attempt to understand the ability of GABA to act as a signal between neighboring synapses (Jones et al., 1999b).

This animation shows 25 ms of the simulated diffusion of GABA in and around a synapse.
• The gray cubes represent cell membranes. They are 320 nm on each side and separated by 15 nm.
• The green dots are 5000 GABA molecules, which can only travel in the “extracellular” spaces between the boxes.
• Each red square marks a “postsynaptic surface”, populated with GABA-A receptors whose colors change according to their kinetic state ( Unbound, Bound1, Bound2, Open1, Open2, Dfast, Dslow; Jones et al., 1998). GABA transporters are present on every surface, although they are not shown.

Note that GABA molecules can diffuse out of the synapse where they were released (middle) and enter a neighboring synapse about 500 nm away (top), where they can activate or desensitize a fraction of the neighboring GABA-A receptors.

Inhibition and Information Processing by Neural Circuits
The traditional view of inhibition is that it acts like an activity-sensitive clutch, to keep neural excitability under control. However, recent work has revealed many more subtle and computationally flexible features. For example, a single GABAergic interneuron is capable of synchronizing the firing of hundreds of target cells, providing just one illustration of how inhibition can sculpt the flow and timing of “information” in neural circuits.

However, the word “information” is still rather poorly defined in this context. A common approach is to ask what aspects of a behavioral stimulus are “encoded” by neural activity, generally using extracellular recordings in vivo. In such experiments, spikes can be observed but the sources and nature of the synaptic drive are very difficult to isolate.

An alternative approach, which I employ, is to begin with a well-isolated circuit using brain slices which allow for simultaneous high resolution recordings and control at multiple pre- and postsynaptic sites in the circuit. One can then ask what operations the circuit performs on signals that are fed into it, and attempt to identify the biophysical mechanisms that allow it to perform its function as a signal processing device.

With quantitative knowledge of the input and output of the circuit, one is in a much better position to precisely define “information” and characterize its flow within the circuit using the well established methods of Signal Processing and Information Theory. I am currently using these methods to investigate signal processing in the dentate gyrus. 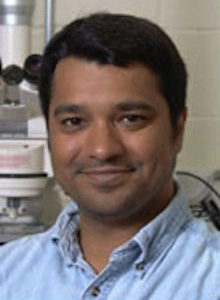