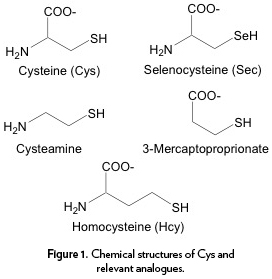 Cysteine dioxygenases (CDOs) from eukaryotes are monomeric non-heme iron enzymes that play an essential role in the catabolism of cysteine (Cys, Figure 1). Several crystal structures of resting and substrate-bound mammalian CDOs have been published that reveal two surprising structural motifs in the first and second coordination spheres of the Fe center (Figure 2). The first is the existence of a neutral three histidine (3-His) facial triad that coordinates the Fe ion, as opposed to an anionic 2-His- 1-carboxylate facial triad that is typically observed in mononuclear non-heme Fe(II) dioxygenases. To date, only two other non-heme iron enzymes have definitively  been shown by X- ray crystallography to possess a 3-His metal-binding motif (namely, diketone cleaving dioxygenase and gentisate 1,2- dioxygenase), though a similar facial triad is likely present in ADO. The second unusual structural feature exhibited by mammalian CDOs is the presence of a covalent crosslink between the sulfur of C93 and an ortho carbon of Y157 (mouse CDO numbering scheme). Much like the 3-His triad, this feature of the CDO structure has only been crystallographically observed in a relatively small number of enzymes (including galactose oxidase and the bacterial sulfite reductase 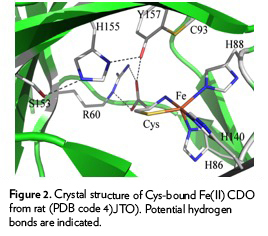 NirA), though a bioinformatics analysis revealed that a large number of additional proteins may possess a C–Y crosslink. The exact role this crosslink plays in catalysis is unknown. Until recently, it was believed that only eukaryotes possess the capacity to degrade Cys to cysteine sulfinic acid.However, less than a decade ago, Stipanuk and coworkers identified numerous bacterial enzymes that could potentially possess CDO activity. Although bacterial CDOs generally have sequence identities of less than 30% compared with the mammalian enzymes, these proteins feature many of the conserved active site residues of the eukaryotic CDOs, the most notable exception being C93 (mouse numbering scheme). In bacterial CDOs, this position is occupied by a highly conserved glycine, which implies that these enzymes are not capable of forming a C–Y crosslink. Indeed, a recent X-ray crystallographic study of the Bacillus subtilis CDO (BsCDO) revealed that the tyrosine residue corresponding to Y157 in mouse CDO is unmodified in the bacterial enzyme. With this important exception, the BsCDO active site structure is almost identical to that of mammalian crosslinked CDO, even in the Cys-bound state (Figure 3). Despite the lack of the crosslink implicated in increasing activity in eukaryotic CDOs (vide supra), bacterial CDOs are active at rates paralleling those of cross-linked eukaryotic CDOs. 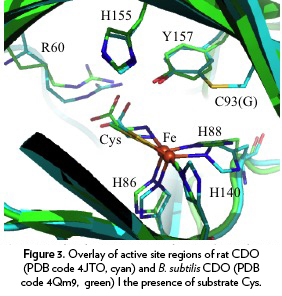 In an effort led by Stipanuk in 2007, a Position-Specific Iterated Basic Local Alignment Search Tool (PSI-BLAST) search of the murine genome using mouse CDO as the query sequence revealed a hypothetical cysteamine dioxygenase (ADO) that shares a low (14%) yet significant degree of overall identity with CDO. When expressed as a recombinant protein, ADO exhibits significant cysteamine dioxygenase activity in vitro. Like CDO, ADO displays a remarkable substrate specificity, failing to oxidize Cys and showing no inhibition by structurally similar compounds, such as 2-mercaptoethanol, which differs from cysteamine by the substitution of the amine group with a hydroxyl group (Figure 1). Although ADO has not yet been structurally characterized by X-ray crystallography, a comparison of mammalian ADO sequences with those of homologs present in other eukaryotes revealed that the 3-His facial triad that coordinates the Fe ion in CDO is likely preserved in ADOs. Given these similarities, a particularly promising approach for examining the ADO active site in the absence of structural information involves parallel studies of CDO and ADO using spectroscopic techniques that can selectively probe the metal cofactor.

The focus of our CDO research has been on (i) examining the electronic properties of the NO adduct of Cys-bound Fe(II) CDO and the azide adduct of Cys-bound Fe(III)CDO (species that mimic early reaction intermediates), (ii) investigating the effect of various first- and second-sphere amino acid substitutions on the active site properties and reactivity, and (iii) exploring the origin of the remarkable substrate specificity displayed by CDOs. As for ADO, we have recently obtained the gene from the Stipanuk lab and initiated the first spectroscopic and computational studies of this enzyme. Our preliminary data reveal some intriguing differences between CDO and ADO with regards to their substrate/active site interactions. 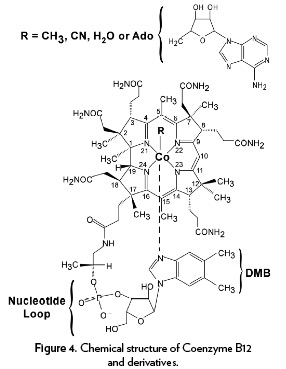 The adenosylated derivative of vitamin B12, adenosylcobalamin (AdoCbl, see Figure 4), serves as the cofactor in several different enzymatic systems. AdoCbl-dependent Class I isomerases and Class II eliminases, such as methylmalonyl-CoA mutase, glutamate mutase, diol dehydratase, and ethanolamine ammonia lyase, initiate the structural rearrangement of their respective substrates via homolytic cleavage of the Co–C bond of AdoCbl to generate an Ado• radical. The AdoCbl cofactor used by these enzymes is either synthesized de novo or derived from assimilated exogenous cobalamin species, such as vitamin B12. Remarkably, prokaryotes employ more than 25 enzymes to catalyze the stepwise conversion of 5- aminolevulinic acid to AdoCbl via cobalamin precursors like cobinamide that possesses the complete corrin ring but lacks the 5,6-dimethylbenzimidazole (DMB) base on the “lower” face of the corrin ring. In contrast, eukaryotes lack the biosynthetic machinery needed to synthesize AdoCbl de novo; instead, they convert assimilated cobalamin species to AdoCbl using ATP:corrinoid adenosyltransferase (ACAT) enzymes that transfer the adenosyl group from ATP to the cobalamin substrate. Malfunction of the human adenoslytransferase (hATR) can cause methylmalonic aciduria, a fatal disease in infants.

Early studies of ACAs carried out by other research groups have revealed that the Co–C(Ado) bond formation step involves a nucleophilic attack on the 5’-carbon of ATP by a transient Co(I)corrinoid species that is generated via two separate one-electron reductions of a Co(III)corrinoid precursor. While Co(III)/Co(II)corrinoid reduction potentials are sufficiently positive to ensure that in vivo the Co(III) to Co(II)corrinoid reduction occurs spontaneously, the Co(II)/Co(I)corrinoid potentials are significantly lower than the reduction potentials of readily available in vivo reducing agents. We have studied several evolutionary unrelated ACATs using a range of spectroscopic methods and have observed unique spectral features characterizing ACAT-bound Co(II)corrinoids in the presence of co-substrate ATP. We have attributed the appearance of these spectral features to a significant weakening of the bonding interaction between the axial ligand and the Co(II) center, so as to generate effectively four-coordinate Co(II)corrinoid species that possess considerably more positive reduction potentials than their five-coordinate counterparts. Compelling experimental evidence in support of this proposal was obtained in recent X-ray crystallographic studies of a bacterial analogue of hATR and the CobA-type ACAT from Salmonella enterica. 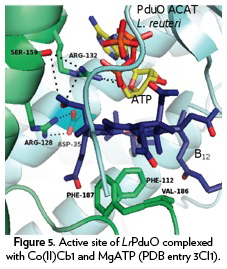 With high-resolution X-ray crystal structures of members of two of the three known classes of ACATs now available (Figure 5), our recent research efforts in this area have been directed toward (i) the spectroscopic characterization of a member of the third ACAT family, (ii) the development of a molecular-level understanding of the mechanism by which the “activated” 4c Co(II)corrinoid species are formed in the ACAT active site, and (iii) a detailed characterization of the Co(I)corrinoid key reaction intermediate.

Halogenated aromatic and aliphatic organic compounds that are generated in various agricultural and industrial processes have been classified as priority pollutants by the EPA. As such, the detoxification of halogenated anaerobic bacteria has recently garnered considerable interest. These bacteria employ a diverse family of B12-dependent enzymes that are capable of degrading halogenated substrates. The overall reaction catalyzed by these enzymes, which are collectively referred to as reductive dehalogenases (RDases), formally involves the removal of a halide ion from an organic substrate with the subsequent addition of a hydride ion.97 Because two electrons, provided by an external source, are consumed in the catalytic cycles of RDases, organohalide-respiring microorganisms are able to use halogenated substrates as a terminal electron sink for respiration. 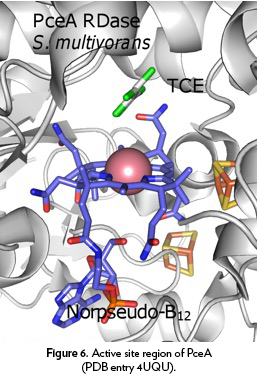 A comparison of the primary sequences of putative RDases indicated that their B12-binding domains are highly conserved, while their substrate-binding motifs vary considerably to conform to their respective substrates. However, recent crystal structures of the RDases from Sulfurospirillum multivorans (PceA) and Nitratireductorpacificus pht-3B (NprdhA) revealed some additional intriguing differences. Most notably, while the NprdhA RDase binds Co(II)Cbl, in PceA a norpseudo-Co(II)Cbl species is present (Figure 6) in which the DMB moiety is replaced by an adenine base and a methyl group is missing at the periphery of the corrin ring (Figure 4). Despite these differences, both structures show the presence of a weakly bound water ligand in the upper axial position of the Co(II)rrinoid cofactor (at an unusually large distance of ~2.7 Å), while the intramolecular base is detached from the Co(II) ion. Very little is currently known about the mechanism employed by RDase enzymes, though various (conflicting) mechanisms have been proposed in the literature. Our preliminary MCD data of PceA-bound norpseudo-Co(II)Cbl in the absence and presence of TCE provide compelling evidence that the substrate does not actually displace the weakly bound water molecule from the cofactor, nor do any of its chloride substituents notably interact with the Co(II) ion. Many of the approaches we have developed in our studies of ACATs can be used in our ongoing work on RDases. 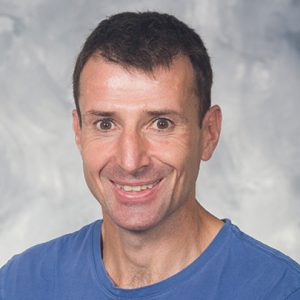