A major focus of our laboratory is to elucidate the molecular mechanisms that mediate Ca2+ triggered exocytosis in neurons and neuroendocrine cells. To address this issue, as well as a number of related membrane trafficking and synaptic function questions, our laboratory is divided into three related and highly interactive subgroups:

Reconstitution/Nanomechanics of Fusion
This subgroup uses a wide variety of modern technologies to understand how proteins catalyze the fusion of lipid bilayers. We have developed a number of novel fusion assays, including the use of nanodiscs and planar lipid bilayer electrophysiology to study single recombinant fusion pores with µsecond time resolution. This work has led to new insights concerning the function of SNARE proteins, which form the core of the presynaptic fusion machine, and synaptotagmin (syt) 1, which we have shown – via chemical genetics and other approaches – operates as a Ca2+ sensor that triggers rapid synaptic vesicle exocytosis. We also use single molecule fluorescence, atomic force microscopy, and DNA nanostructures (to reconstitute fusion pores for cryo-EM), to address the structure and dynamics of fusion pores.

Neuronal Cell Biology
One focus of this subgroup is to determine the function of each of the seventeen isoforms of syt. We found that a number of isoforms regulate large dense core vesicle fusion, while others are targeted to distinct destinations, including: Golgi, lysosomes, endosomes, and the plasma membrane. In some cases, the same isoform is present in more than one compartment. For example, we discovered two pools of syt17, and found that one pool regulates neurite outgrowth by controlling the early secretory pathway while the other pool controls the surface expression of AMPA receptors by regulating endosome recycling. This subgroup also seeks to understand: a) how various syt isoforms are sorted within neurons, b) the life cycle of synaptic vesicle proteins as they are created and destroyed, and c) how synaptic vesicles themselves are created. This work has resulted in numerous discoveries; e.g. using the RUSH system and a new generation of Halo ligands to study the itinerary of a syt isoform, we recently discovered a new membrane trafficking pathway in mammalian neurons. We also carry out tool development, including new methods to acutely disrupt integral membrane proteins.

Synaptic Transmission and Plasticity
This subgroup uses electrophysiological and optical approaches (including iGluSnFR, high speed Ca2+ imaging etc.) to study three modes of synaptic vesicle exocytosis – spontaneous, synchronous, and asynchronous – in cultured neurons and brain slices. We have recently identified the Ca2+-sensors that mediate these various modes of release and have used this information to tune synaptic kinetics. Current projects aim to determine the impact of human syt mutations, to understand the interplay between large dense core and synaptic vesicle exocytosis, and to assign functions to a myriad of ‘orphaned’ synaptic vesicle (and other presynaptic proteins) that have been cloned. Another focus is on synaptic plasticity, including paired pulse facilitation, augmentation, synaptic depression, LTD and LTP, as many of these phenomena are regulated by C2-domain proteins in the syt and Doc2 protein families. 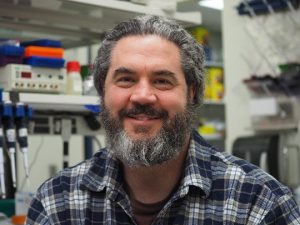