We are interested in relationships between biopolymer structure and function, with an emphasis on proteins and protein-inspired molecules. Our group combines tools from biochemistry, biophysics, chemical biology and organic chemistry in pursuit of experimental goals. Many projects involve collaboration with other laboratories at UW-Madison and around the world.

A major theme in our research emerges from a fundamental question: how do structural and functional properties of polypeptides change when the backbone is modified? Proteins evolve naturally via side chain modification (mutation of one α-amino acid residue to another), and engineered side chain modification has become a standard strategy in protein science. In contrast, very little is known about the impact of polypeptide backbone modification, perhaps because this type of variation does not seem to have been explored in biological systems. Evaluating backbone modification currently requires the application of chemical synthesis methods (standard solid-phase techniques).

Much of our work so far has involved extending the amino acid backbone by one carbon, i.e., examination of β-amino acids as an alternative to α-amino acids (Figure 1). We are interested further subunit extension as well, to γ-amino acids and beyond, but such efforts require considerable investment in organic synthesis.

We have asked how backbone modification affects the informational properties of polypeptides, i.e., how this type of modification affects interactions with partner proteins. Oligomers that contain mixtures of α and β residues (α/β-peptides) have proven to be particularly interesting. α/β-Peptides containing 25-30% β residues, with α → β replacement sites distributed evenly, can adopt an α-helix-like conformation and bind to protein partners that naturally associate with α-helical ligands. In contrast to authentic α-peptides, however, the α/β-peptides are poorly recognized by protease enzymes. Thus, these α/β-peptides persist in biological environments that cause rapid destruction of analogous conventional peptides (α residues only).

Figure 2 shows the crystal structure of a 38-residue α/β-peptide (yellow, orange and blue) bound to an engineered partner protein (gray) that represents a critical portion of the HIV protein gp41. Viral infection depends on gp41, which orchestrates fusion of the viral envelope with the target cell membrane. Our α/β-peptide, like the conventional peptide on which it is based, blocks HIV infection in a cellular assay (Horne et al. PNAS 106:14751 (2009)). The crystal structure shows that the α/β-peptide forms a 10-turn helix and binds into a long, complementary groove presented by gp41. The α/β-peptide is an excellent structural mimic of the α-helix that naturally binds to the target site on gp41, despite the fact that every turn of the α/β-peptide helix contains one more carbon atom than does one turn of an authentic α-helix.

The anti-viral example illustrates how polypeptides with modified backbones can bind to specific recognition sites on target proteins and thereby block pathogenic protein-protein interactions while resisting proteolytic destruction. More recently, we have discovered that backbone modification of polypeptide hormones can generate agonists with unique receptor-activation profiles. The B-family GPCRs that are activated by hormones such as GLP-1 or PTH exert powerful physiological effects (Figure 3) and are targets of drug development. Receptor conformational changes induced GPCR engagement with an agonist are detected by intracellular proteins, such G proteins and β-arrestins, which then initiate distinct signaling processes. Backbone modifications can alter the signaling profile (Cheloha et al. Nature Biotech. 32:653 (2014); Hager et al. J. Am. Chem. Soc. 138:14970 (2016); Hager et al. Biochem. Pharmacol. 136:99 (2017)). We are currently working to elucidate and harness these remarkable effects. 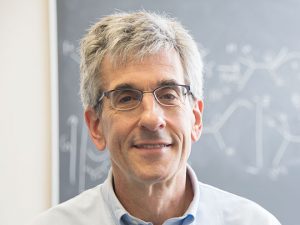