NACRE
The nacre layer, or mother of pearl, at the inner surface of the abalone shell and of other mollusk shells and pearls (see images in the sample compendium) has a fracture resistance 3000 times greater than that of aragonite, the pure mineral of which it is composed. The toughening effect is due to well-defined nanolayers of organics at the interfaces between micro-tablets of aragonite (JD Currey 1977, 2005).

Nacre formation is poorly understood at the molecular level, and this piqued our interest in this material, exploring the organic-mineral interface (Gilbert 2005, Metzler 2010, Metzler 2010).

We strive to understand the fundamental mechanisms leading to the formation of the beautiful, extraordinarily efficient, self-assembling natural structures in nacre. We recently discovered a new polarization-dependent imaging contrast (PIC) mechanism, also known as linear dichroism. The PIC-mapping method we developed (DeVol 2014) showed that adjacent stacks of co-oriented tablets have different crystallographic c-axis orientations, and consequently the nacre growth direction cannot be identified with the c-axis (Metzler 2007). The appearance of the columns also inspired new models for the formation mechanism of nacre (Gilbert 2008).

Our hypothesis is that the physical structure of nacre is affected by the environmental conditions at the time of nacre deposition. We are currently exploring this possibility (Olson 2012, Olson 2012, Gilbert 2015 in preparation).

We recently discovered that nacre forms via two amorphous precursor phases, similar to those found in sea urchin biominerals, and not proto-aragonite (DeVol 2015). 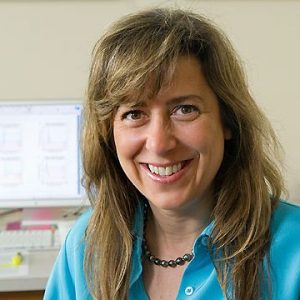