Investigating molecular mechanisms of evolution and the origins of life

We investigate key questions regarding molecular mechanisms of evolution and the origins of life. We are interested in understanding how the ancestral behaviors of proteins and their host systems change through time. The overall goal of our work is to assess the possible environmental impacts of ancient enzymes on global-scale signatures that record biological activity.

About 2.5 billion years ago there was a massive increase in oxygen in the Earth’s atmosphere and we infer that these changes were, in part, being driven or governed by protein behavior. We focus on proteins that are thought to be essential for early metabolisms and study how they may have changed themselves and how in turn this could have changed our environment.We rely on phylogenetic tree reconstructions to infer the evolutionary history of genes and proteins. We reconstruct selected gene sequences from the built trees and characterize the properties of these synthetized ancient proteins in the laboratory either biochemically or by engineering them inside bacterial genomes. In order to understand how the ancestral behavior of proteins and their host systems change through time, we are reconstructing key proteins that are involved in phenotypically distinct metabolic pathways that are of interest to biologists and geologists. Through our collaborations with paleobiologists and phylogeneticists, we aim to answer the question of whether the phenotypes we observe relate to larger scale changes in the global biogeochemical system.

When accessing the deep past, we have two main datasets to draw upon in reconstructing major transitions in the biosphere: the rock record (i.e., fossils, biosignatures and geologic indicators of environment) and extant biotic diversity (i.e., genetic sequences, proteins and organismal variability). Under this theme, we explore paleogenetic methodologies that allows us to reconstruct and then resurrect ancient protein sequences and utilize these modern tools for interpreting ancient biosignatures recorded in the rocks, and for shedding light on significant past events in evolution.

We are interested in harnessing the potential of exciting and ancestral DNA sequence space and resurrect the conditions. We take a similar approach to origins of life problem to Tesla’s approach to generate electricity. Try everything, and see what works without reference to environmental plausibility, and then back engineer the conditions. Can we do this with today’s biology/ biochemistry? Our goal is to modify and manipulate the modern translation machinery with reconstructed ancestral homologs and to recapitulate steps in the evolution of translation.

The forces influencing evolutionary adaptations are undoubtedly governed by historic constraints: an organism’s past constrains its future. To what degree, however, do prior mutations and ancestral phenotypes shape future evolutionary pathways? Did life in the past function or evolve similarly to life today? Did the biology of ancestral organisms, the functions of their proteins or other factors inherently limit their ability to evolve into modern forms?

This project asks whether adaptive pathways are inherently deterministic, dominated by internal or external controlling or limiting processes, or highly contingent upon chance events such that very different evolutionary outcomes may arise from identical initial conditions. Little is currently known about how prior evolutionary history shapes future evolutionary trajectories, or a lineage’s capacity to produce adaptive variation. Our approach is to systematically investigate how prior history affects the evolution of modern organisms. We individually engineer modern bacterial genomes with a series of inferred ancient genetic sequences and then experimentally evolve the ancient-modern hybrid bacteria in the laboratory to examine how the ancient genes and modern genome adapt to each other. The work draws upon tools from a variety of disciplines such as paleogenetics, synthetic biology, experimental evolution, whole-genome sequencing as well as proteomics, and demonstrates a new approach with which to probe historical pathways of evolution, as well as to connect genotype and phenotype. 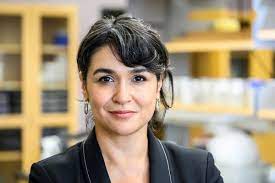