Our research focuses on structure/function of RNA polymerase (RNAP) and its central role in the regulation of gene expression. The catalytic activity of RNAP is highly regulated by signals in DNA and RNA and by extrinsic regulators that determine whether or not genes and operons are successfully transcribed. Befitting its importance in regulation, RNAP is a complex enzyme with multiple subunits and many moving parts. We seek to understand how different signals and regulators control RNAP activity. We study this both at a basic structure/function level by dissecting interactions and movements of the different parts of RNAP and at a cellular level by determining how regulators affect RNAP’s global distribution among and movement along genes and operons. Current projects in the lab take distinctly different approaches, ranging from genetics to biophysics, but all rely on each other for overall progress. 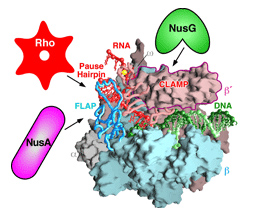 A paused transcription complex and regulatory inputs for bacterial RNAP, which consists of β’, β, ω, and two a subunits. Nascent RNA hairpins can pause or terminate transcription. NusA stimulates pausing and termination via contacts that include the hairpin. Rho stimulates termination. NusG stimulates elongation. Human RNAPII contains 12 instead of 5 subunits and is regulated by other factors through related mechanisms.

Regulation of Bacterial RNAP
Bacterial RNAP is regulated by intrinsic RNA/DNA signals that cause pausing or termination and by highly conserved elongation regulators such as Rho, NusA, and NusG. Key goals of current research are to determine where these regulators contact RNAP and how they alter its conformation. We investigate these issues using molecular genetics, protein-protein crosslinking and footprinting, rapid quench-flow kinetics, and protein engineering. A current high priority is to obtain a crystal structure of a paused transcription complex to learn how the active site is rearranged in the paused state. We also use single-molecule transcription assays with our ‘tri-lab’ collaborators at Stanford and Brandeis, for which visualizing the effects of elongation regulators on RNAP movement is a high priority.

Regulation of Human RNA Polymerase II
Control of transcript elongation plays central roles in human biology, for instance by regulating HIV-1 gene expression, controlling gene expression during differentiation (e. g., conversion of stem cells to specialized cells), and controlling mRNA splicing and processing, which are coupled to transcript elongation.  However, the mechanisms by which elongation regulators control human RNAPII are largely unknown.  We are investigating human RNAPII elongation control in several ways.  First, we have developed rapid kinetic assays to dissect the elongation and pausing mechanism.  Second, we are using site-directed mutagenesis to create specifically altered human RNAPII enzymes to investigate these mechanisms as well as how elongation regulators like DISF/NELF and TFIIS alter with RNAPII.  Finally, we are developing single-molecule assays for human RNAPII so that we can exploit approaches similar to those we apply to bacterial RNAP.

Study of Transcriptional Regulation in vivo
We study transcription in cells using two different approaches.  In collaboration with Aseem Ansari (Biochemistry) and Tricia Kiley (Biomolecular Chemistry), we study the global distributions of RNAP and regulators in microbial cells growing in different conditions using so-called ChIP chip assays.  These experiments promise to revolutionize our understanding of transcriptional regulation by showing how RNAP and regulators are distributed among genes as cells change their regulatory programs. We also are developing methods to produce recombinant RNAPs in E. coli from diverse bacteria, especially from difficult-to-study pathogens.  We use the recombinant RNAPs to study their novel regulatory properties.  This approach also is being developed as a high-throughput whole-cell assay for novel and lineage-specific inhibitors with potential applications as new antibiotics. 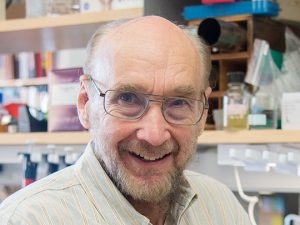